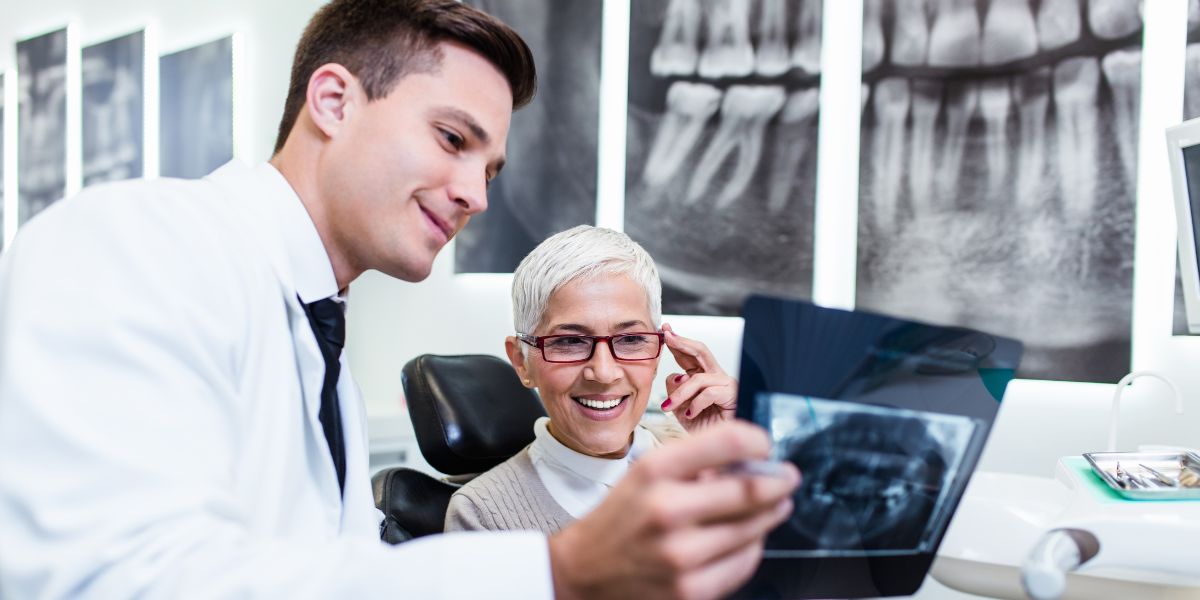 June is Alzheimer and Brain Awareness month, and Ashland Dental is sharing valuable information about Alzheimer’s, dementia, and dental care. Did you know that your dental health has an impact on your brain health? A 2020 National Institute on Aging study found that gum disease and Alzheimer’s disease may be connected. Researchers still have more work to do to clarify what these new findings mean for the prevention and treatment of Alzheimer’s. However, this new information offers us a deeper understanding about the connection between our brains and our dental health.

Ashland Dental has made it our mission to help our patients understand these connections. We offer complete health dentistry because we recognize that there are so many ways that improving your dental health can improve your life. When it comes to aging, your dentist can be one of your greatest allies in creating healthy habits that can help stave off or reduce the potential for Alzheimer’s, vascular dementia, and other forms of dementia. Let’s take a look.

Alzheimer’s is defined by the Alzheimer’s Association (ALZ) as, “A degenerative brain disease and the most common form of dementia.” ALZ also notes that, “Dementia is not a specific disease. It’s an overall term that describes a group of symptoms.” The early signs of Alzheimer’s will vary from person to person. The most common early Alzheimer’s indicators include:

An individual experiences episodes of memory loss that impact their quality of life. They may forget quite common information that makes it difficult for them to navigate the world independently. This is not the same as forgetting your keys on the counter or whether or not you locked the front door when you left. Bouts of memory loss can cause severe confusion, frustration, and anxiety.

Alzheimer’s can also make it difficult for sufferers to perform once-easy tasks. Even simple tasks like driving to a favorite diner or grocery shopping can become confusing or disorienting.

One of the more disappointing and frustrating symptoms of dementia is the potential for unexpected behavioral changes. A person may become withdrawn, irritable, irresponsible, or angry. They may isolate themselves or even engage in behavior that is completely opposite of the way they have behaved for decades.

A person exhibiting early signs of Alzheimer’s may have difficulty telling time or understanding where they are. Just like the other early symptoms, this struggle does not have to be constant. A person may experience these incidents in waves or upon occasion.

These are just a few of the early indicators of Alzheimer’s that may alert a person or their family to seek out a health professional. Do not wait for symptoms to get worse to consult a doctor. The sooner you begin to get a handle on dementia and Alzheimer’s, the better chance you will have at treating the disease. The National Institute on Aging has a comprehensive list available here.

How Does Oral Health Impact Alzheimer’s?

According to findings in multiple studies, there are many indicators that oral health does impact Alzheimer’s. The most compelling is the new research that examines the bacteria that cause gum disease (P. gingivalis) and the discovery of those bacteria in the brain. The video below was developed as part of a trial for a new medication to help aging patients. It explains how these bacteria migrate from the mouth to the brain and contribute to degenerative brain diseases. Give it a quick watch!

As noted in the video, our bodies lose their ability to fight off bacterial infection. This is a particular problem when it comes to oral health because there are hundreds of bacteria in the mouth. As discussed by both the video above and the NIA study, the bacterium of particular concern is P. gingivalis. P. gingivalis is the culprit in persistent periodontitis. It has also been found in the brains of Alzheimer’s patients and is theorized to lead to degeneration.

Enlisting Your Dentist in the Fight Against Alzheimer’s

Your dentist can be an ally in the fight against Alzheimer’s. There is so much that you can do right now to begin improving your oral health. The first step is paying a visit to the dentist. They can determine if you have healthy gums, gingivitis or periodontal disease. Treating and preventing the gum disease that can contribute to Alzheimer’s requires a dentist to assess your oral health.

If you’ve suffered with gum disease for long time, it’s critical that you see a dentist soon. The older you are, the more important it is to get a handle on your gum health as quickly as possible. Alternatively, if you are younger, you should get an early start on reversing gum disease so there is less opportunity for P. gingivalis to travel into your bloodstream and begin doing damage.

Even patients who have already received an Alzheimer’s/dementia diagnosis can benefit from prevention, treatment and reversal of gum disease. For example, a study conducted by the Alzheimer’s Society noted that: “People who had gum disease declined in memory ability six times faster than those who did not over the six-month follow-up period. The researchers concluded that gum disease is associated with an increase in cognitive decline in Alzheimer’s, possibly by mechanisms linked to the body’s inflammatory response.” That means that a patient can potentially slow the decline of their brain health after an Alzheimer’s diagnosis.

Get Started with Improving Your Dental Health!

Ashland Dental is invested in you and helping you lead the healthiest life possible. We can help you assess your oral health to determine if you are currently at risk for gum disease. We can also assess you for other potential indicators that may signal issues with cognitive health, such as sleep apnea. Give us a call today to schedule an appointment. We can help create a care plan for you that focuses on your complete health.